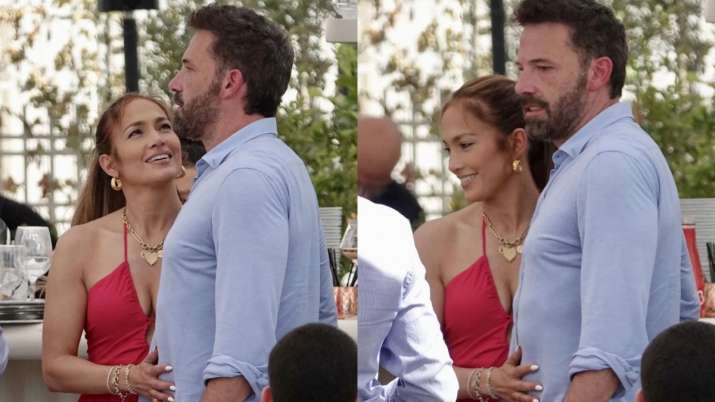 Hollywood star couple Ben Affleck and Jennifer Lopez are currently enjoying their romantic getaway in Paris. However, the actor was spotted getting emotional during their trip as he broke down in tears as the singer-actress cradled his head. The pair had stopped off at restaurant La Girafe for dinner on her 53rd birthday as they enjoyed the view of the Eiffel Tower, reports mirror.co.uk.

Pictured enjoying an intimate meal before being surprised by a cake adorned with sparklers, the couple appeared to be happier than ever as they cuddled each other. It’s not known why Affleck began crying, though Lopez appeared to be comforting him by putting a hand on his cheek.

The couple tied the knot in a surprise ceremony in Las Vegas earlier this month and haven’t been able to keep their hands off one another since arriving in the French capital. They have also been seen enjoying an alfresco dinner with their kids – Affleck’s children Violet, 16, and Seraphina, 13, as well as Lopez’s 14-year-old Emme.

Meanwhile, Hollywood star couple Jennifer Lopez and Ben Affleck are said to be planning a bigger second wedding at the actor’s home in Georgia. After their low-key nuptials in Las Vegas, the happy couple are reported to be going to hold the ceremony and party with family and friends.

A source told People that the newlyweds “plan on having a bigger party so they can celebrate with family and friends.”

The insider added: “They don’t have a honeymoon planned yet. Jennifer says that every day with Ben is a honeymoon.”

“Ever since they started dating again, Jennifer has truly believed that this is it,” the so-called inside source went on. “She is looking forward to growing old with Ben. She is very happy and content with Ben. She couldn’t ask for anything else. She thinks it’s all perfect.”

Lopez’s closest family members include her 14-year-old twins Max and Emme, whom she shares with ex-husband Marc Anthony, as well as her mother Guadalupe, her father David and her sisters Lynda and Leslie. Her closest celebrity friends include Leah Remini, Jane Fonda and Renee Zellweger, reports aceshowbzi.com.

He is close to his famous brother Casey Affleck and mother Chris, whereas his other famed pals likely to be invited to the second ceremony include Matt Damon and George Clooney.

According to TMZ, the second wedding will take place at 49-year-old Affleck’s home in the coastal town of Riceboro, Georgia, just outside Savannah. The two-storey mansion has four bedrooms and four-and-a-half bathrooms, while there are two smaller properties on the grounds with additional bedrooms that could house guests.

The outlet added that the second ceremony will take place there in the next few weeks. It was also claimed that Lopez recently flew to the Georgia house to look it over and talk about the plans with her manager Benny Medina, who was said to have been on site with the singer.

[Download 100%] – Is BTS’ Jin Making His Acting Debut? Here’s What We Know About K-pop Star’s Plans