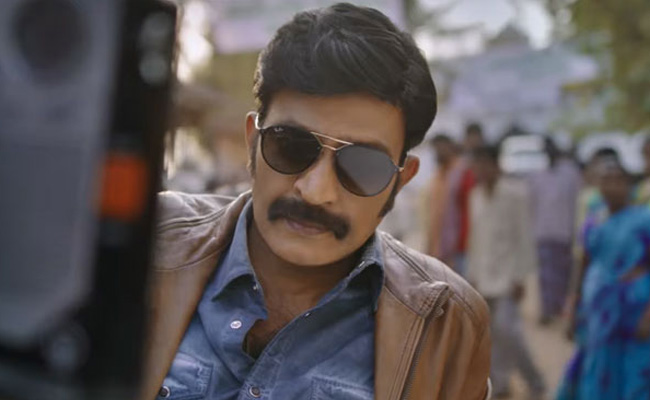 “Garuda Vega” has changed the view of Rajasekhar’s films. His collaboration with ‘Awe’ director Prasanth Varma has created a lot of buzz and both have exceeded expectations with the stunning teasers and trailers.

Did the film live up to its promise? Let’s figure it out.

Narsappa (Ashutoshu Rana) is a ruthless political leader who has a rivalry with Perumandlu. One day Narsappa’s brother Sekhar Babu (Jonnalagadda) is killed.

A police officer Kalki (Rajasekhar), who specializes in encounters, is sent by the government to investigate the matter. A journalist Devadutta (Rahul Ramakrishna) tries to help Kalki.

How Kalki solves the murder case and who killed Sekhar Babu and for what reason?

Rajasekhar, who is known for playing angry police officers, has played the role of an investigative police officer. His body language and his performance are okay, but his makeup sucks.

After Rajasekhar, it is Rahul Ramakrishna who has been given a long role and he is good in his role, doing both comedy and serious act.

Siddhu Jonnalagadda as Sekhar Babu is impressive. So does Nandita Swetha as Asima Khan. Nasser and Ashutosh Rana did a good job.

Prasanth Varma has proved himself in charge of technicians in his debut film ‘Awe’. This film was made on a bigger budget and it got the best output from cinematographer Dasaradhi Shivendra.

The framing and angles of the shots are creative. Background score is an asset for this movie. Writing dialogues is appropriate. Production values ​​are fantastic.

Director Prasanth Varma debuted in “Awe”, another psychological thriller made on a budget. His second film “Kalki” is a historical investigative thriller.

The movie interestingly starts with the voiceover of how the Kollapur region was ruled by the noble family of Rani Ramachandramma. Narsappa seeing power seized sets the palace on fire and kills all the royal departed.

This story is revealed to journalist Devadatta (Rahul Ramakrishna) by a local villager and soon Sekhar Babu, Narsappa’s brother was killed by hanging him on the tree and setting it on fire.

Then comes the introduction of Rajasekhar. These 15 minutes of the story have set the right mood and move into the film. We are also being transported to a new environment and its problems.

The visuals, the atmosphere, the cinematography are perfect here. But the movie completely goes for the toss when the director focuses on Rajasekhar doing his research and Rahul Ramakrishna being afraid of ghostly figures, etc.

Then there is a long thread of Rajasekhar and his past love affair with Dr. Padma played by Adah Sharma.

The romantic thread and their chemistry is very bad and also the sequences shot in Hilly Himalayas didn’t add anything to the narration other than having rich production value.

Until the intermission, the film moves slowly, except that there are some compelling moments in between, such as the murders of villagers during the boat ride from Kollapur to Srisailam.

The director has given more importance to slow motion shots of action stunts, photography and stylized poses of Rajasekhar.

It is only after the end of the item number after the intermission that the film focuses on the main story and the mystery unfolds. Who killed Sekhar Babu is revealed half way through. The real captivating moments are the final reveal by Nandita Swetha.

Although the thriller and its premise is very clichéd, the director has tried to present it in a stylized way with commercial elements. The action blocks are good, but enjoying slow motion too much has tested patience.

The narration is uneven during these 142 minutes. Despite this, it certainly delivered some compelling moments and the reason why Rajasekhar is named after the Kalki avatar and the overall Karma effect is well explained.

Overall, “Kalki” is a mixed bag, which has some exciting moments, but the middle part is too boring. It’s more style than substance with a nice ending.

What it comes down to: Style over substance

(Venkat Arikatla can be reached at [email protected])