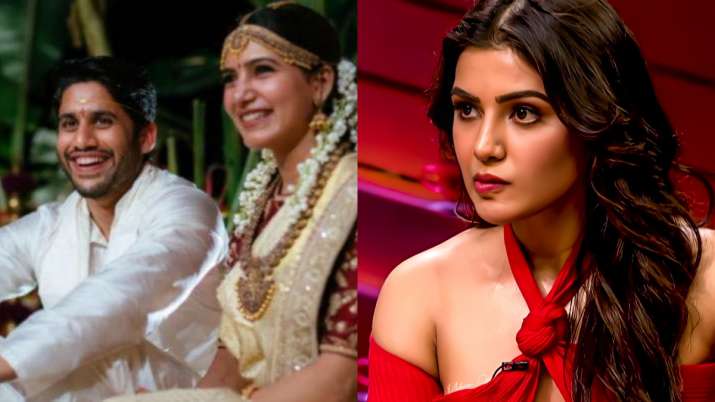 Koffee With Karan season 7: In the latest episode, filmmaker Karan Johar welcomed Samantha Ruth Prabhu and Akshay Kumar and it has created quite a few headlines. The third episode of the popular celebrity chat show marked Samantha’s debut. The actress opened up about her separation from ex-husband Naga Chaitanya and also reacted to the reports that she had asked for Rs 250 crore alimony from him. For the unversed, Sam parted ways with Chay in October last year after four years of marriage. She also revealed that after their divorce, both of them do have hard feelings for each other.

Karan Johar asked Samantha about her life after separating from her Naga Chaitanya. During one of the segments, ‘The Family Man’ actress called the reports that suggested she took an alimony of Rs 250 crores from her ex-hubsand Naga Chaitanya ‘made up’.

The ‘Oo Antaa’ dancer was asked about the worst rumour she heard about herself?, to which Samantha replied, “Should I start alphabetically?” She further went on to say, “That I took 250 crores in alimony. Every morning I woke up waiting for income tax officials to show them there’s nothing. First, they made up the story about alimony. Then they realised it doesn’t seem like a believable story. Then they said there’s a pre-nup, so she can’t ask for alimony.”

Besides this, she also shared that life has been hard after she and Naga Chaitanya separated. “It has been hard. But it’s good now. It’s fine. I am stronger than I have ever been,” she said. ALSO READ: Koffee With Karan: Samantha Ruth Prabhu breaks silence on divorce with Naga Chaitanya on Johar’s show

While talking about her divorce, Karan said, “In your case, I think you were the first when you and your husband decided to part ways,” Samantha corrected him, “ex-husband,” Karan then continued, “Sorry ex-husband. When you and your ex-husband part ways. Did you feel a lot of trolling was a result of you putting yourself out there?” Samantha replied, “Yes, I can’t complain about it because I chose that path to be transparent and when the separation happened I couldn’t be too upset about it because they invested in my life. I didn’t had answers at that time.” ALSO READ: Koffee With Karan 7: Samantha Ruth Prabhu corrects KJo when he calls Naga Chaitanya her ‘husband’

When Karan asked her, “Do you guys have hard feelings?” Samantha replied, “There are hard feelings like if you put the both of us in a room you have to hide sharp objects. So as of now, yes.” She also said, “It’s not an amicable situation right now. It might be in the future.”

Meanwhile, the third episode ended on a happy note, with the Akshay Kumar winning the quirky rapid-fire round with 83 per cent votes of the live audience and Samantha winning the buzzer round.

[Download 100%] – Ranveer Singh’s Nude Photoshoot: Mimi Chakraborty Questions ‘What If, It Was A Woman?’