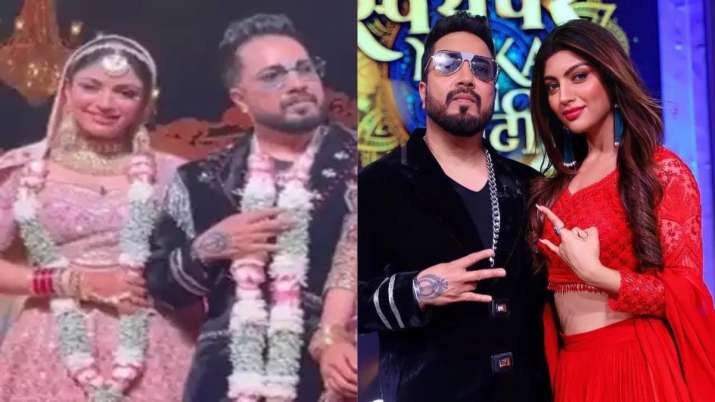 Mika Di Vohti winner: If latest reports are to be believed, singer Mika Singh’s wife will be Akanksha Puri. The singer has chosen his life partner through a reality show, where 12 women participated to win Mika’s heart. Apparently, Akanksha Puri was successful and Mika has chosen her to be his life partner. In the finale, she was competing against Prantika Das and Neet Mahal.

All the three finalist celebrated their haldi, mehendi and sangeet ceremonies, before the big day when Mika had to decide on his bride. Reportedly, on Mika Di Vohti finale the singer put the wedding garland on Akanksha Puri announcing her as the winner of the show and his future wife.

“While Mika did not marry Akanksha on the stage, he put the wedding garland on her to signify his choice. He shared that he wants to spend quality time with her away from the cameras before they take the nuptial vows. Mika also met Akanksha’s family and sought their blessing as he decided to embark on this new journey with her,” Indianexpress.com quoted a source as saying.

Mika and Akanksha have been friends for a long time now. Akanksha who rose to fame with her character Parvati in the show Vighnaharta Ganesha had claimed that they had both known each other for more than a decade. Earlier a photo of them together went viral. At that time it was claimed that Mika and Akanksha are planning to get married. However, the two quashed the reports saying it was just a pooja.

Related |​ Akanksha Puri has this to say on wedding rumours with Mika Singh: Fans love to see us together but..

Akanksha told a media portal that the pictures and videos are from a paath (pooja) that she attended at the singer’s residence. “So this was a paath (pooja) that he (Mika Singh) kept at his residence, it’s done for positivity and good luck for future,” she told the portal adding, “I just went there to seek blessings but looks like people are assuming something else! And coincidentally this was on April fool’s day so people thought it’s some prank but these are genuine pictures and videos from his house!! Mika and I know each other for more than 12 years now, he is more like a family, he has always been there for me and we share a very strong bond!! But definitely, we are not engaged nor we have any such plans!!” she had said.

Meanwhile, Mika Di vohti finale episode is yet to premiere on Star Bharat and Disney+ Hotstar.

Sunny Deol is getting treated in the US; here’s what happened to the Bollywood actor