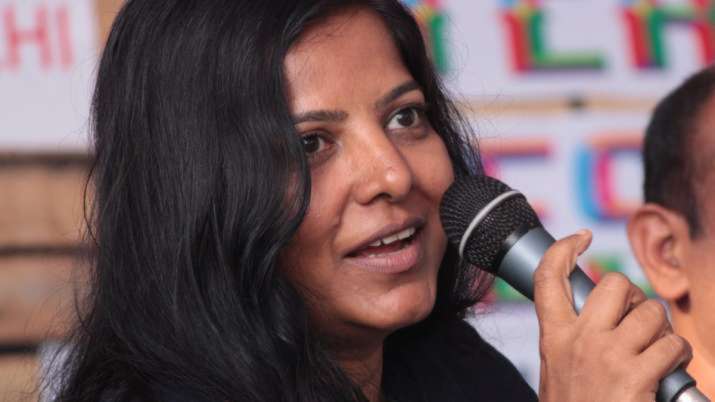 Hours after Twitter pulled down Leena Manimekalai’s tweet about her documentary ‘Kaali,’ the Canada-based Madurai-born Indian filmmaker shared another ‘debatable’ picture. The director, who is in the eye of the proverbial storm over the controversial poster, took to her Twitter handle and dropped a picture, which depicted a man and a woman dressed as Lord Shiva and Parvati, smoking. “Elsewhere….” she captioned the post.

A poster for a documentary directed by filmmaker Leena Manimekalai has drawn flak on social media for hurting religious sentiments with the depiction of Goddess Kaali. She had earlier taken to Twitter to share a poster of her film which depicted a woman dressed in a costume portraying the goddess and smoking. A flag of the LGBT community is seen in the background. The film was part of the “Rhythms of Cananda” segment at the Aga Khan Museum in Toronto, according to a tweet by the filmmaker.

Talking about her ‘Kaali poster’ Manimekalai told BBC Tamil, “As far as I am concerned, “Kaali” is an ambitious, unbridled, primordial being who tramples on all that is considered monstrous, and who chops off all the heads of evil. Kali is a film that shows what would happen if such a person got inside me for an evening and crawled the streets of Toronto.”

Further describing the documentary, she said, “My Kaali believes in love and sharing. She accepts the cigarette from a Black street dweller at a park around Kensington market in Toronto and listens to reggae.”

The presentation of Leena Manimekalai’s film was pulled down by the Aga Khan Museum after it received social media ire. The controversial poster of the documentary was subjected to a lot of hatred on social media and elsewhere. Multiple police complaints were filed against the filmmaker with many demanding her arrest. As the matter escalated, Canada’s Aga Khan Museum apologised for “inadvertently causing offence to members of the Hindu and other faith communities. It also said that it has removed the presentation of the film. ALSO READ: Who is Leena Manimekalai? Why is her film poster featuring goddess Kaali getting criticised?