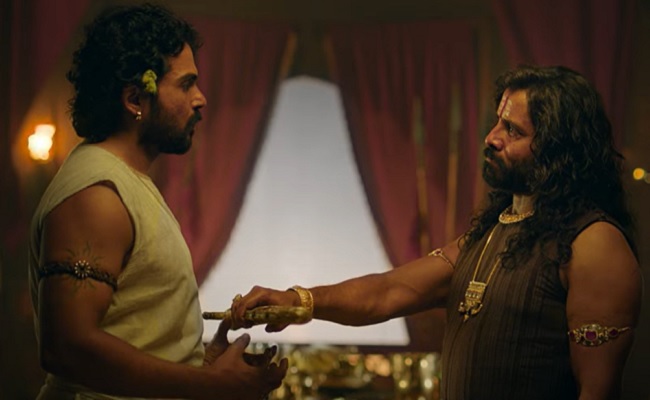 After Baahubali, RRR and KGF movies, Mani Ratnam’s “PS1” is the only historical drama that caught everyone’s attention. The hype surrounding the film is huge. Bookings of $1 million in the US alone prove just how much buzz the film has generated.

Let’s see if the film lives up to expectations.

Pallavatturyar (Sarath Kumar) and his wife Nandini (Aishwarya Rai) plan to make Madhurantakudu (Rahman) as the next king instead of Aditya Karikaludu (Vikram).

After this information, Kundavi (Trisha) sends Vanthiyadevudu (Karthi), a spy, to take her brother Arunmozhi aka Ponniyan Selvan (Jayam Ravi) from Srilanka to Tanjore.

The film has many characters, but only a few become important. Among them, Karthi as Vandiyadevudu takes first place.

The film begins with his journey from one place to another. In the first half of the film, Karthi dominates the show. He also tries comedy.

Vikram as Aditya Karikaludu only appears in three episodes. His acting has a déjà vu feeling.

Aishwarya Rai Bachchan plays a dual role. As Nandini, she has an amazing screen presence. She is given limited space to showcase her achievements, but she holds the attention with her charm and grace. Trisha as Princess Kundavi is beautiful. She looks a lot younger than her real age.

The best part of the film is Thota Tarani’s excellent production design. The sets are stylish. He recreates the Chola period. Ravi Varman’s camera has further improved the production design. The VFX work is impressive in some places and not up to the mark in others. AR Rahman’s songs didn’t work in the film, but his background music is compelling.

Disadvantage:
Hard to understand first half
Leisure
No goosebumps moments

The makers proclaimed ‘PS1’ to be ‘the story of India’s greatest empire.’ Based on a Tamil novel called “Ponniyan Selvan”, Mani Ratnam made the film in two parts and the first part is here. Before its release, there were comparisons between Rajamouli’s “PS1” and “Baahubali” but both are completely different, neither match in any way, be it war sequences or grandeur of visuals.

“PS-1” is a story based on real history and the many characters with hard-to-remember names keep coming. It is a cumbersome task to figure out the names and characters yourself. For those unfamiliar with the novel and its history like this reviewer, understanding the procedure and understanding the characters is difficult.

The movie starts with the journey of Vandhiyadevudu. Karthi as Vandhiyadevudu flirts with women, dances, does comedy stunts, plays with a Brahmin (played by Jayaram) and gets into fights. Through him we meet all the characters, first Aditya Karikaludu, then Nandini, then Kundavi and finally Ponniyan Selvan. Its long journey and many subplots cover the story of this first part.

However, the film is structured in such a way that much of the plot takes place in the first half, which is very difficult to understand. By the time we get the story, the movie comes to an interval bang. With so much focus on many characters and their backgrounds, we don’t get high moments. In the entire first half, the only intriguing moment when Vikram kills a person is when Aishwarya Rai begs him to pardon her.

The second half of the film shifts the drama to Sri Lanka, where Ponniyan Selvan lives. The visuals in the second half are excellent. The action scene on a boat is the main highlight. The film comes into its own in this part. But then it quickly ends with a twist, which in no way corresponds to ‘Kattappa’ twist.

The film’s greatest strength is its production design and cinematography. The locations are another highlight. These are made for big screen experience. But the story isn’t strong enough to enjoy it. For the Tamil audience, the movie can work well as they are familiar with the story and characters. For us it is a cumbersome experience.

Overall, despite its grandeur and high-making values, ‘PS-1’ is far from captivating. You need a lot of patience to watch the slow drama of almost 2 hours and 45 minutes.