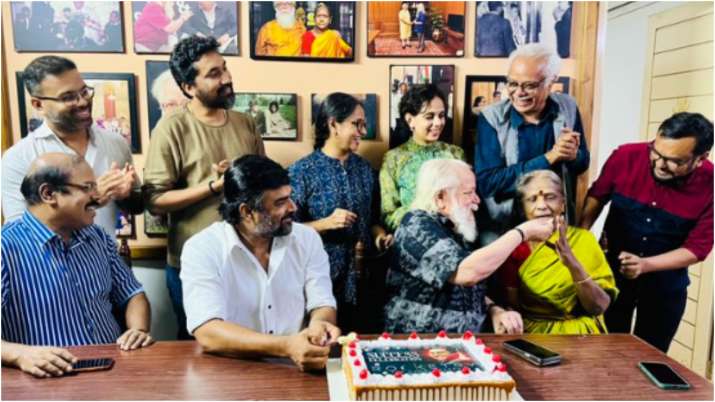 R Madhavan’s Rocketry: The Nambi Effect has been doing good business at the box office pan-India. The movie is based on the former ISRO scientist Nambi Narayanan and also marked Madhavan’s debut as a feature film director. As it continues to receive praise from the cine-goers and critics alike, Madhavan celebrated the success of the film with Narayanan and his family.

Madhavan celebrated the success of Rocketry at an intimate gathering. The actor-director cut cake with Narayanan. The occasion was made all the more special with Narayanan’s family joining in. Madhavan shared a picture on social media from the time and wrote, “When the Success translates to Happiness and the whole family celebrates together. The true meaning of this photo will only be realized by those who know Nambi sirs family and what they went thru.For me – Mission accomplished with gods grace (sic).”

Veteran actor Anupam Kher recently saw Madhavan’s directorial debut Rocketry: The Nambi Effect and he was left highly impressed with the film. Anupam took to Twitter with a video where he shared his thoughts after watching the film. Anupam could be heard saying in the video that he felt both sad and proud on watching the compassion with which Madhavan portrayed the character. “It is certainly one of the best films that I have seen of late,” he said. He also complimented the choice of dialogues and the casting.

Praising Madhavan’s performance, the senior actor said, “Your performance is world class, you are phenomenal.” The actor urged the youth to watch the film, calling it highly inspirational and encouraging.

Rocketry: The Nambi Effect is set to have its digital premiere on Prime Video on July 26. The biographical drama, based on the life of Nambi Narayanan, a former scientist and aerospace engineer of the Indian Space Research Organisation, released theatrically on July 1. On Prime Video, the film will be available in Tamil, Telugu, Kannada and Malayalam. Madhavan said he is thrilled to see how the film would be received on the streaming platform.

(With inputs from news agencies)