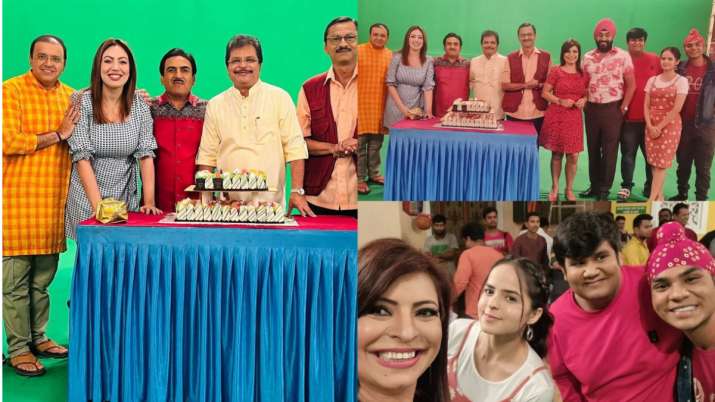 Taarak Mehta Ka Ooltah Chashmah has become television’s most popular sitcom. It enjoys a massive viewership and often tops the TRP charts. Produced by Asit Modi, TMKOC is based on the weekly column ‘Duniya Ne Undha Chasma’ by Gujarati writer Taarak Janubhai Mehta. The show holds the Guinness World Record for the longest-running daily sitcom on television by episode count. On Thursday, the  Taarak Mehta Ka Ooltah Chashmah completed its 14 glorious years. The cast and crew of the show came together to celebrate the iconic milestone. Munmun Dutta took to Instagram and shared the pictures of the celebrations. She captioned the post, “14 glorious years ! Grateful…Joi Maa Durga. Joi Maa Kali.”

Other members of the show also shared pictures and videos from the celebrations. Check them out below:

“Not just on days like this but we miss Nattu kaka everyday. All the actors who we lost during this journey of Taarak Mehta like Ghanshyam Bhai, Azad bhai, our makeup dad Anand who passed away before the pandemic, Arvind and Shishupal from our production team they passed away at a very young age, we miss all of them. We do shifts of more than 12 hours and work with each other. We have spent more time with each other, in fact, more than our families. This is like a small family and when a family member goes away like this, it hurts. And occasions like these make us miss them more,” he said.

He also wished that people who are a part of the show should stay happy and healthy. “God has been kind to us that the show continues to grow and get love from people even after 14 years. We feel blessed that the audience continues to shower love and blessings on us. I would request them to continue to love us so that we get energy to perform better and entertain them,” he added.

For the unversed, the first episode of  the show premiered on 28 July 2008. Its initial cast included names such as Dilip Joshi as Jethalal, Disha Vakani as Daya Jethalal Gada, popularly known as Daya Ben, and Shailesh Lodha playing Taarak Mehta, the narrator of the show, who quit the recently.