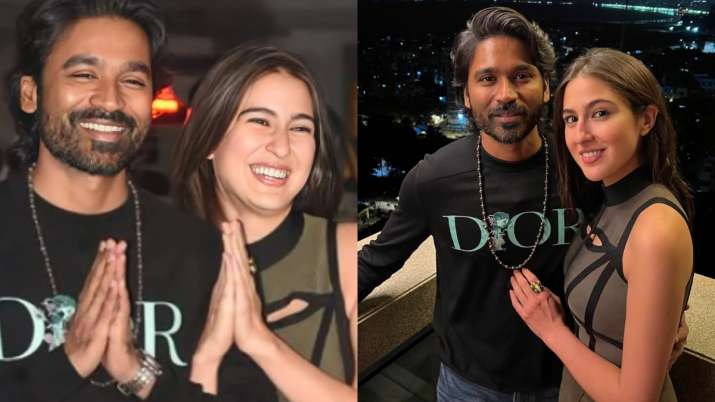 The Gray Man starring Dhanush, Ryan Gosling and Chris Evans premiered on Netflix globally on July 22. Ever since Dhanush had been receiving massive appreciation for his first Hollywood film. In the film, Dhanush plays the role of a cold-blooded assassin named Avik San, alias Lone Wolf. Joining the list of celebrates who can’t stop praising Dhanush for his stellar acting skills is his co-star and actress Sara Ali Khan. Dhanush and Sara shared screen space in  Anand L Rai’s Atrangi Re, which also starred Akshay Kumar. Sara shared an unseen picture on his Instagram story to cheer for Dhanush. Sharing the adorable picture, Sara addressed Dhanush as ‘Vishu Babu’. wrote, “Congratulations on The Gray Man!! I loved you in it, as usual, @dhanushkraja. I had a blast catching up with my Vishu Babu and thoroughly missed @aanandlrai.”

In the photo, Dhanush is seen dressed in a casual Dior sweatshirt wear, while Sara paired a green top with a mini skirt. The picture is from the party hosted by Ritesh Sidhwani for the Russo brothers, who are in India to promote the film The Gray Man.

Soon after she shared the picture, Dhanush reshared the post and thanked Sara. He wrote, “Thank You Sara…It was great catching up with you my Rinku.”

Previously Bollywood actor Vicky Kaushal attended the grand premiere of the film held in Mumbai. Lauding Dhanush, Vicky shared a picture on his Instagram story. He wrote, “More power to you brother @dhanushkraja!”

About The Gray Man

Check out the action-packed trailer of The Gray Man here.