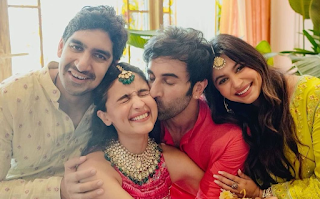 Shaheen Bhatt has also given a statement regarding Alia Bhatt’s pregnancy.  Alia was married in April and in June, Alia informed about her pregnancy.  After this some people had said that Alia had become pregnant before marriage.  Regarding this, Alia’s sister Shaheen Bhatt said that you cannot always keep everyone happy.

Alia Bhatt and Ranbir Kapoor are going to be parents soon. Today, on the occasion of Karva Chauth, Alia is busy preparing. At the same time, Ranbir’s mother Neetu Kapoor has also sent a gift to Alia on the day of Karva Chauth. Recently, a baby shower party was held at Alia’s house. Family and friends had a lot of fun in this party. Its photo was also shared by Alia on her social media.

Pregnancy was announced only after 2 months of marriage

Alia and Ranbir Kapoor got married in the month of April this year. Two months later, in June itself, both of them shared the information about Alia’s pregnancy. After this news, many people had said that Alia had become pregnant before marriage.

There was discussion about this for a long time. Many people had said about this that Alia was pregnant even before marriage, only after that she got married. Now the statement of Alia Bhatt’s sister Shaheen Bhatt has also come out regarding this. In a recent interview, Shaheen Bhatt said that you cannot always keep everyone happy.

Being a public figure has some disadvantages too: Shaheen Bhatt

Shaheen Bhatt said during the interview that it is impossible to please everyone. There are also some disadvantages to being a public figure. Eyes are always on you. Regarding Alia, Shaheen said that she has her own life. Both are public figures, so always some people will talk negative. It is also important to learn what to pay attention to and which to ignore.

The family is excited and nervous about Alia’s pregnancy

Free After Gauahar Khan, now Rahul Vaidya gave his opinion about the contestants of Bigg Boss 16, who is ‘Fake and Real’