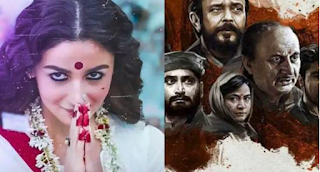 If we do the year 2022, then it has not been good for the Bollywood industry.  All the films released in the theaters in the last 9 months proved to be flops at the box office.  This year neither Akshay Kumar-Aamir Khan walked nor Ajay Devgn, Shahid Kapoor, Ranveer Singh and Amitabh Bachchan were able to show amazing.

If reports are to be believed, Alia Bhatt’s Gangubai Kathiawadi was released when the Corona lockdown was ending.  Nevertheless, the film earned Rs 129 crore at the box office.  Then Anupam Kher’s film The Kashmir Files was released.  The film earned Rs 253 crore.  During this some more films were released which proved to be flop.

Among the flops, Kartik Aaryan’s Bhool Bhulaiyaa 2 exploded at the box office as soon as it was released.  The film earned Rs 186 crore.  With this, Jug Jug Jio was released, which earned 135 crores.  At the same time, the film Brahmastra, which came in September, proved to be a hit at the box office.  The film did a business of 255 crores.

Barring these 5 films, no other film could do wonders at the box office, all proved to be superflops.  Akshay Kumar’s 3 films Bachchan Pandey (49 crores), Samrat Prithviraj (68.05 crores) and Raksha Bandhan (44.39 crores) were flops.  At the same time, Aamir Khan’s Lal Singh Chaddha proved to be a huge flop.

Ajay Devgan’s film Runway 34 proved to be a superflop. The film earned Rs 32.96 crore. At the same time, Tiger Shroff’s Heropanti 2 earned 24.45 crores at the box office. Shahid Kapoor’s jersey also died. The film did business of 19.68 crores only.

Free After Gauahar Khan, now Rahul Vaidya gave his opinion about the contestants of Bigg Boss 16, who is ‘Fake and Real’